At home that evening, I tweezed my eyebrows and scrutinized my reflection in the mirror. I liked to think I was at least semi-attractive, depending on a person’s taste. I had blue eyes, and even though I was on the shorter side, I was well made—neither petite nor stocky. The bearded travel agent had told me I resembled Elijah Wood, but the accountant-violinist had told me I resembled Igor from Young Frankenstein, and I assumed the truth was somewhere in the middle.

In a moment of weakness, I download Grindr. I’ve never used the app before, and there’s something terrifying to me about it. Even the icon looks scary: a yellow phantom transformer face. The collection of gays in western Pennsylvania is small and reminds me of what’s left on the discount merchandise table whenever Home Goods has an eighty percent off sale: a motley assortment of items that are off brand, off season—a rubber ducky, two Everglade pumpkin spice plug-ins, gardening shears being sold in January.

“People are complicated,” said Keith, and he was thinking not just about Phil but also about himself, whether Erin’s death had altered him on some fundamental level, a chemical or physiological level like the soil samples she used to analyze, and whether the alteration was permanent. He thought about the note he’d left at Connor’s door. Perhaps he’d gone from behaving like a stalker to becoming a stalker, a difference that seemed significant. It was something that might have convinced the old him to back off, but of course the old him wouldn’t have gone in the first place.

She was fitted with her artificial limb once her lower thigh had shriveled to the size of a fist. She bought two of them, one for walking and one for running. Together they cost the same as the motorcycle, even with her health insurance, and had names that sounded to her like Star Wars characters—Otto-Bock 3D, C-Leg 3R80. She opted for the computerized knee, and at night she plugged the legs into outlets to charge, next to her cell phone.

When the caseworker phones to say that the birth parents have revoked consent, Rachel Eizen concludes the call is a prank. It is an early April Fools’ joke. It is the result of the caseworker’s twisted sense of humor, dark and aggressive from witnessing too much interfamilial turmoil.
“I know…” the caseworker says. “I know this is an adoptive parent’s worst nightmare.”
Rachel looks down at Matthew, who is sprawled on the changing table, the clean diaper under him but not yet Velcroed on. She tells herself to breathe, to focus on simple truths. Today is Wednesday. She and Ben received Matthew on Saturday. The waiting period in Ohio is four days.

On Halloween night I sat on my porch and passed out candy. There were more superheroes than monsters this year, which seemed oddly encouraging. I didn’t recognize any of the children or their parents, and even though this wasn’t unexpected, it made me sad. Raymond and I had become sort of reclusive in the last few years, even before his sickness. His house was on the corner of our block, and the house next to mine had been bought up by Wayne State University and converted into a dinky ornithological museum.

The summer I was twelve and my sister Zoe was three, I gave her a peppermint that she choked on. It was one of the red-and-white, swirled peppermints my sixth grade teacher Mrs. Hahn awarded students when they scored well on a grammar quiz. I had a stash of them in a shoebox under my bed. Zoe and I were watching The Jetsons in the den. My mother was in the barn, and my father was two years dead from a heart attack. She’d warned me about foods that were choking hazards for Zoe—hard candies, whole grapes, large pieces of hot dog—but I wasn’t worried. I just tossed it to her, no explanation.

Shortly before Barb’s son Zach was supposed to leave for Michigan State University, he told her there was no way in hell he was going, and that she would have known this if she weren’t such an arrogant, self-involved, malicious bitch.
“Since when have you thought I was arrogant?” said Barb. She didn’t know how else to respond anymore.
The following week she came home from work to find him gone. There was a note on the kitchen counter. It said, “I’ve withdrawn my trust money and am moving to Florida.” It said that he hated her, that he wished her dead. “Don’t even think about trying to contact me,” it said.

Recently, though, she was the one who wanted sex, who tried to be affectionate. She liked to cuddle, and was always asking Lukas for permission to hold him. “But you’re already holding me,” he sometimes said.
“No,” she’d say, and she would cup his chin and squeeze, like an aunt or a grandmother. “I mean like this. Is this okay?”
“Yeah,” he’d say, “that’s okay.”

In the spring, Vella saw a neurologist about tremors. It was her co-worker Dawn who first noticed them. Vella’s hand was hovering over her keyboard, and Dawn pointed to it. “You anxious?”
“Not that I know of,” said Vella, and she stared at her hand, stunned.
She expected a CAT scan or a blood test, but instead the doctor made her walk back and forth in a straight line. He made her move her hands over her head and then out in front of her and then to the side.
“Is this a diagnostic test for Parkinson’s or tryouts for the cheerleading squad?”
The doctor smiled, fatherly. “You’re nervous.”
“Yes,” she said.

I worry about Derek, something I resent. He’s bald and short and prone to ear infections. When he loses his temper, it comes off as self-consciousness about his smallness and my heart melts a little. He yells, swears, his face reddens, and I want only to comfort him, to pat him on his back, to give him money for the arcade, to fold him up and put him in my pocket. 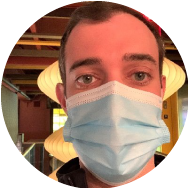 Jordan Rossen’s fiction has appeared in Carve, Colorado Review, Fourteen Hills, Grist, upstreet, and elsewhere. He earned an MFA in Creative Writing from the University of Montana and currently lives in metro Detroit. He is working on a novel.

OTHER FACTS ABOUT JORDAN

Paul Rossen’s review of Jackie’s Back!

A great interview of Lorrie Moore